You begin on a small fishing platform, with nowhere to go but to drop down into the water below.

Enter the shallows and swim south past a collection of sunken statues. You will discover two groups of krait, each guarding a captured villager. Defeat the krait and free the fishers by interacting with the cages. Be aware that the krait’s movements sometimes put them in the ceiling, so if look up if you're missing some.

Swim through the small opening to the east and follow the narrow passage. The next part of the fractal can be one of two options, known as the dark path and the dolphin path. The path alternates each day. 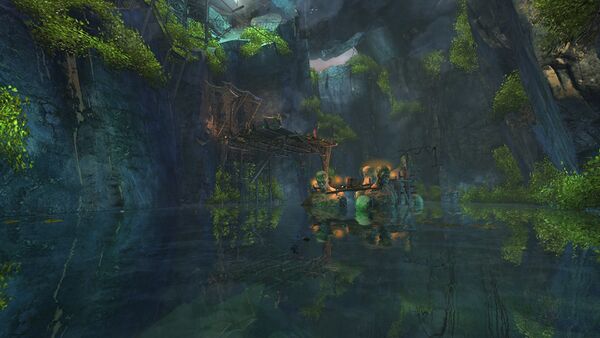 A note on underwater builds

At the time of writing, Aquatic Ruins is the only underwater endgame PvE content in the game (aside from Honor of the Waves), so many players will not have builds properly set up or not know what their underwater rotation should be. Further, the limited underwater weapon options mean that some classes have no good options.

By and large, most classes will have one power-focused weapon and one condition-focused weapon, so weapon swapping is usually not recommended. It may also be beneficial to switch to elite specs that provide additional skills regardless of weapon choice, such as Firebrand.

For power classes, it is reasonable to set up the sigils on your underwater weapon(s) specifically for this fractal as the choice will be less impactful elsewhere. and are recommended if you will only run a single set. Condition builds should use the same sigils as their terrestrial weapons. You should also get an extra rune for your aquabreather as the 6th bonus is often the strongest.

Condition builds should use their standard sigils. 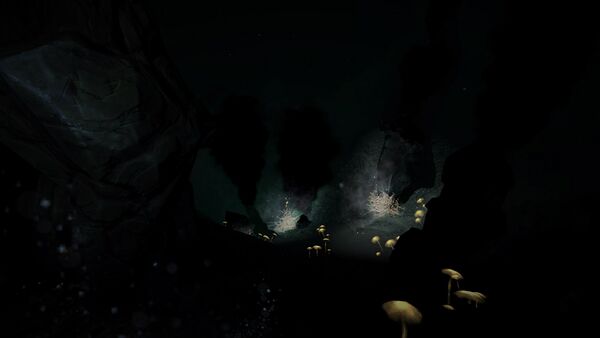 Follow the path south and you’ll find yourself in dark waters lit only by Luminous Plants. Stray too far from these plants and you will be attacked by

Piranhas of the Deep that deal 30% of your maximum health as damage every second. Fortunately, you can pick up the plants and hold them for up to seven seconds, providing a mobile light source. While holding it, you also gain a skill called

Lifeguard that consumes the plant and heals nearby allies for 5000 hitpoints. The dark path is guarded by a number of Veteran Jellyfish that can remove the light you carry, so try to fight them near the plants if you have to.

Be aware that at the end of the path you will need to fight a Champion Krait Warden along with two Veteran Krait Wardens. While in the path itself, you will be constantly in combat and there is no checkpoint, so stick together as a group and make sure you’re on the correct build. You may also want to make sure you don’t have any jellyfish following you before you fight the champion.

The Champion Krait Warden must be defeated to open the nearby gate. The champion will apply

Regeneration to itself and summon some jellyfish to assist it, but only really has one attack worth noting – a hard-to-see Poison Cloud that pulses

Weakness. Quickly move away if you notice that you’re caught in it. It is worth noting that there is a Luminous Plant right next to the champion so players can repeatedly use it to provide a lot of group healing and make the fight much easier.

Head through the opened gate to reach the boss of the fractal. 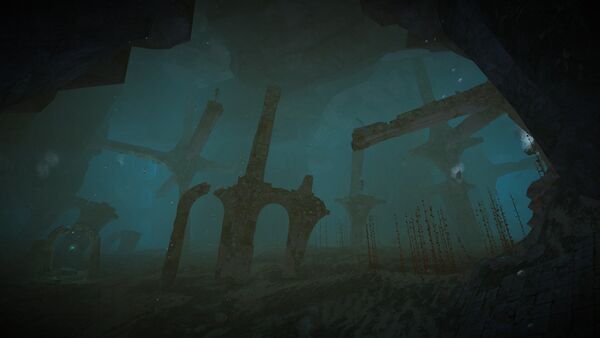 Heading north you’ll pass through a portal that transforms you into a dolphin! It may be worth pre-buffing some

Swiftness to make the journey a little quicker (and safer). While in dolphin form, your health is set to 25000 and your skills are replaced by dolphin skills:

Rush - Gain a burst of speed. Passing through revealed water spirals reduces the recharge of this skill.

Stealth - Use the currents to obscure your position. Passing through revealed water spirals reduces the recharge of this skill.

Retrieve Ally - Revives and teleports nearby downed dolphin ally to your location.

As you travel, spamming the first skill will reveal hidden Krait Slavers and water spirals. Passing through the water spirals will reduce the cooldown on your

Stealth skills by 10 seconds, and you can double back to pass through the same spiral multiple times if it is safe to do so.

If you get too close, the Krait Slavers will chase you and attack with Heavy Weight – an attack that drags you downwards while dealing heavy damage.

Stealth to evade the Krait Slavers, and try to stick together so that if one of you is downed you can use the

Retrieve Ally to save them. Only one player needs to make it to the next area, however.

After a short passage north, the ruins open out to a larger area. There are two paths of water spirals that can guide you to the next area – one to the northeast, and one to the southeast. The two paths are approximately the same length, but the southern path puts you in close proximity to a Champion Krait Daimoss so it may be worth going the other way.

Shortly you will come across another portal that transforms you back into your normal form. This also unlocks a checkpoint, so you can /gg to reset if some didn’t make it through.

The area ahead contains more krait, as well as a Champion Krait Warden who must be defeated to open the nearby gate. You can clear out the nearby krait before engaging the champion, though you have no reason to go too far east. The champion will apply

Regeneration to itself and summon some jellyfish to assist it, but only really has one attack worth noting – a hard-to-see Poison Cloud that pulses

Weakness. Quickly move away if you notice that you’re caught in it.

Once defeated, you can head through the gate to find a Krait Handler and their pet jellyfish. Unfortunately, pets aren’t allowed per the tenancy agreement, so they have to be put down. You can also just swim right past them. 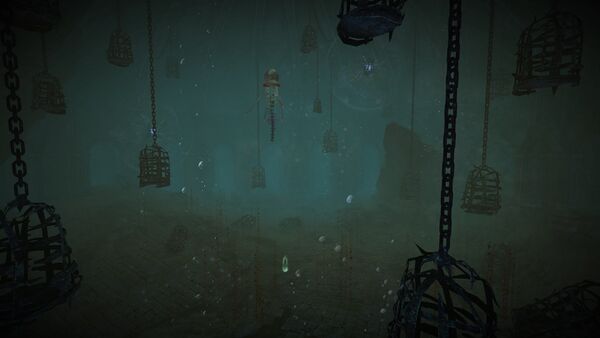 Both paths now join, and a checkpoint is unlocked. There is a Mistlock Singularity nearby to pre-buff, but keep an eye out for the large bubbles that will trap players and drag them upwards. These bubbles will be present throughout the fight with the Jellyfish Beast and can be quite disruptive. The higher tier, the more bubbles there will be. You may also notice some hanging cages around the area. These can become electrified during the encounter, inflicting damage,

Daze to anyone close enough.

As you engage the boss it will summon some jellyfish allies and attack. It will regularly summon more jellyfish throughout the encounter. It has some basic ranged and melee attacks, along with a few more dangerous abilities to look out for:

– the tips of the Jellyfish Beast’s tentacles glow blue and it begins to spin, slowly pulling nearby players towards it. If they get too close they will be repeatedly stunned, while taking a small amount of damage.

Swallow – The Jellyfish Beast will glow red, pull in a random enemy (has very long range and doesn’t seem to be avoidable), and apply

Agony to them while a unique buff called Eat that regenerates health and significantly reduces the damage it takes for as long as the player remains . The swallowed player’s weapon skills are changed and they must repeatedly select the struggle skill to escape. Pressing the wrong key gives the boss 10 stacks of

Poison. Pressing the wrong key enough times will cause the beast to spit you out (at higher tiers it will kill you outright) and gain

Resistance. Press the correct key enough times and the boss will spit you out and gain a unique debuff called Weakened that causes it to take extra damage for 20 seconds. Each time you press a key, the position changes. If the player doesn't escape within 15 seconds, they will automatically fail and be spat out (or killed).

Pets and other non-player minions can be targeted with this attack, and they have no way of escaping so if this happens, try to pet swap or destroy the minion if you can.

At 25% health intervals, the boss will become immune and summon Elite Krait Diviners to protect it (one at 75%, two at 50%, three at 25%). Several krait will also spawn nearby. Move as a group to each diviner and kill them to make the boss vulnerable again.

While in the split phase, everyone will be repeatedly hit for a small amount of damage with . In addition, the boss will be pulsing

Resolution on itself, which will last into the next phase. If your team has a lot of condition damage it may be worth making sure you have a way to strip this boon at the start of each boss phase.

At the start of each new phase, the boss will summon more jellyfish. You will also have to deal with any krait that weren’t killed in the split phase. A final group of krait will spawn just before the boss dies, but they will disappear again after it is defeated, so they can be ignored.

Premium Membership
Upgrade to premium membership and take advantage of all the premium benefits, including complete ad removal across the entire website, for less than $1 per month! Upgrade
Builds by Game Mode
Builds by Profession
Guides
General
Network Sites