How to Get the Griffon Mount

Once players have finished the PoF story, they will start to find strange items dropping from creatures in the Crystal Desert. The descriptions of these items point you towards Beastmaster Ghazel. Double-clicking the item will open the map and highlight the location he may be found.

Talk to Beastmaster Ghazel, and he will direct you to his apprentice, Seeker Kandake, who may be found at Spearmashal’s Lament.

Talk to Seeker Kandake and she will identify that the item comes from a griffon, and suggest that you look nearby. To the east you will discover the Sunspear Sanctuary and the Remains of the Last Spearmarshal. Talking with the remains will unlock the collection

Note that players who have finished the PoF story can go directly to the Sunspear Sanctury and start the collection, without needing to find the strange items or visit the first two NPCs.

You will be given the : An item that allows you to return to the Sunspear Sanctury. It can also teleport you to Sun’s Refuge (if you have it unlocked), and will allow you to trade up to 75 a day in exchange for unidentified gear and minis.

Tasked with restoring the Sunspear Sanctuary, players must travel across the five maps of the Crystal Desert, buying supplies from heart vendors, completing events, and finding griffon eggs.

The supplies cost 25 gold each, and are bought from heart vendors (requiring completion of those hearts). Each map has two such supplies to purchase. After being obtained, the supplies may be consumed for some trade contracts.

The order these collections are completed in is unimportant.

You must complete the bounty on the Legendary Corrupted Facet (Group event). The bounty itself may be obtained from the bounty board at Destiny’s Gorge.

Collect five eggs from the locations below. All suggested routes start at the Temple of Kormir. 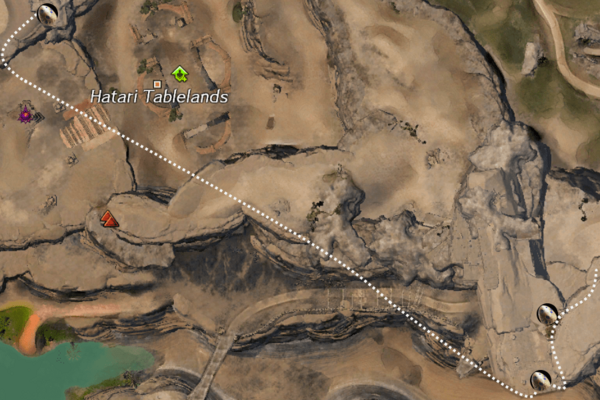 Climb the cliff north of the Temple of Kormir, then continue to the peak to the west to find the first egg. Drop down the cliff to the south and look for another egg partway down. Next, fly north-west past the mastery point and jump up the cliff to find a third egg. 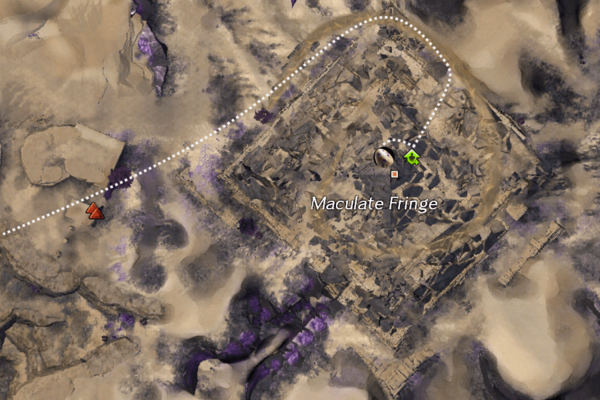 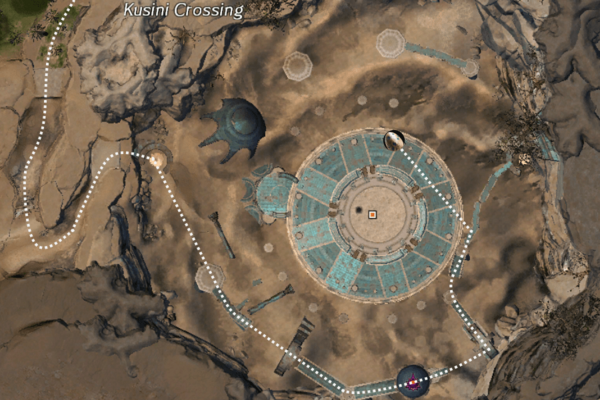 Find the entrance to the Sanctum of Nabkha south-west of the Temple of Kormir. Follow the sand portals and floating masonry until you reach a point where you can jump up onto a large platform surrounded by columns of different heights. The egg can be found on top of one of these columns.

Defend Second Spear Nayrim (Group event). This is part of an event chain that begins in Makali Outpost.

Collect five eggs from the locations below: 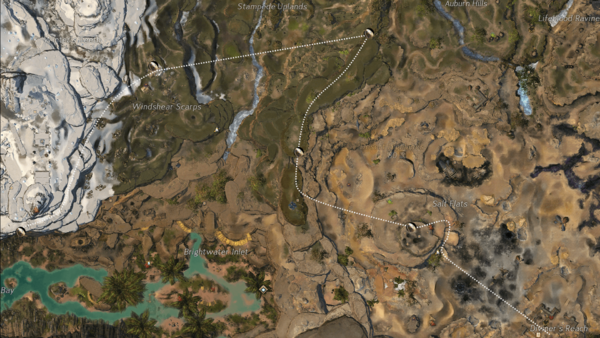 Collect three eggs from the locations below: 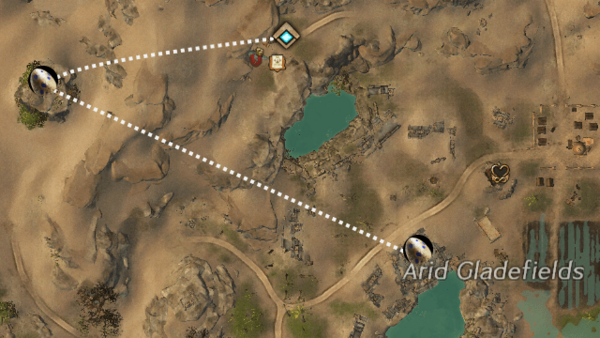 Climb up the rocky pillar to the west of Olishar's Oasis Camp to find an egg, then fly south-east towards to reach another egg just below the vista. 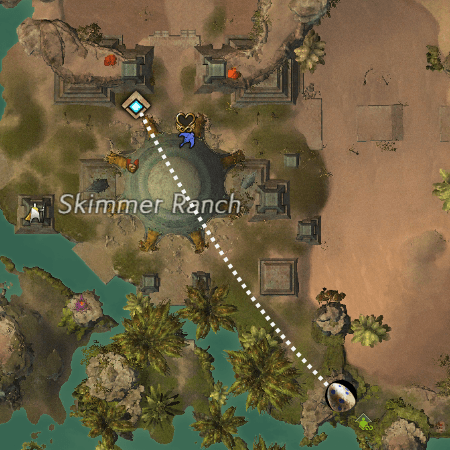 Head south-east of the Skimmer Ranch towards the hero challenge, and climb to the top of the first rocky spire you reach to find a final egg.

Patrol with Redeemer Kossan near Torment’s Watch. There are three similar events, any of which will award the rune.

Visit Sandstrewn Shrine and search north-west of the point of interest.

Collect four eggs from the locations below: 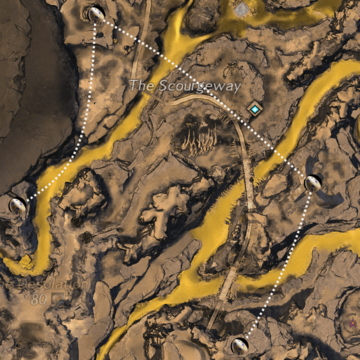 Make your way to the clifftop south of The Scourgeway (head south from the waypoint through the awakened-infested area then east past the Zayan Gate and climb). Collect the egg here, then fly north-east, heading for the top of the large stone chain-link to collect another egg. Next, head north-west past the waypoint to land on a rocky spire for another egg. Finally, follow the cliff wall south and then west to reach the last egg on the edge of a cliff. 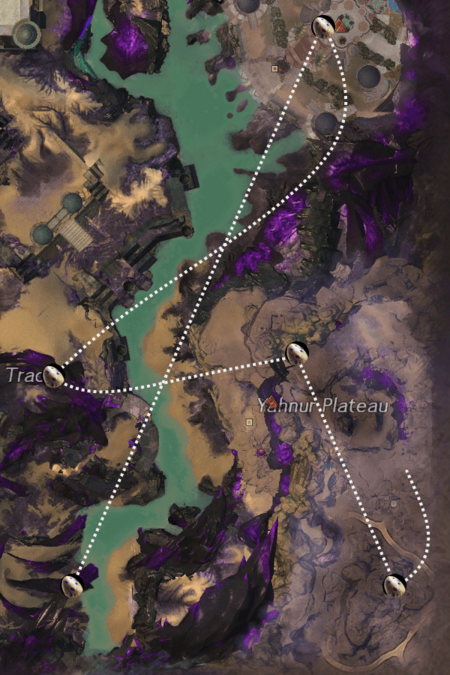 Start from the Sunspear Sanctuary and head south to the tallest of the two nearby spires for your first egg. Fly north-west to land on another tall spire, and jump up to the top for another egg. Next, fly west and land near the top of a branded formation to collect another egg – be wary of the brandstorm! Now fly north-east, aiming for the location where the Brand meets the roof of the Hanging Gardens and find another egg on the other side of a large gap. Finally, fly south-west to land on another branded formation and grab the last egg.

After finishing all the above collections, return to the Sunspear Sanctury and interact with the various locations to place the collected eggs and runes. This will grant you the Divine Passage and begin the next collection. At the Tomb of Primeval Kings you can now interact with the seal at the back of the Tomb, where you entered the mists during the main story. Doing so now will transport you to Kormir's abandoned library.

Within the Sanctum are 10 caches, each of which requires a key to open. These keys are obtained by killing elites within the library, each of which has the Key Hoarder effect along with an Unstable Magic Ability. The elites will eventually respawn so you can ignore any elites that prove to be too difficult.

The cache locations are shown below. Caches located in the upper level are indicated by an arrow. 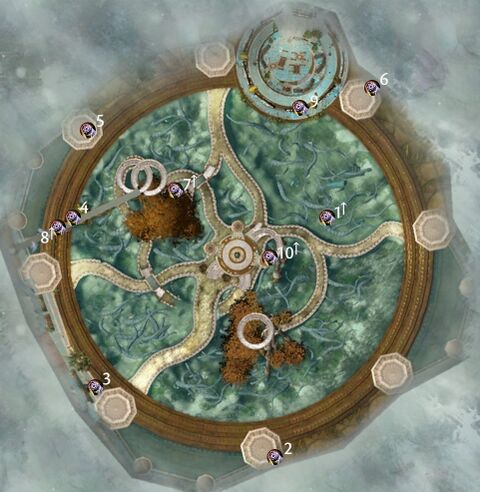 On Wings and a Prayer

Once all writings have been found, return once more to the Sunspear Sanctuary and interact with the pedestals surrounding the statue of Kormir to place the Writings of the Last Spearmarshal. This grants access to the final instance required to unlock the griffon.

A Mordant Crescent Hierarch must be defeated to protect the Sunspear Sanctuary. At 25% health intervals, the Hierarch will become invulnerable and the nearby griffons will begin to glow. Interact with one of these griffons to mount it and use

Swoop to attack the boss, breaking his shield. When the Hierarch dies, you will unlock your very own griffon!

Once you train the Aerial Prowess and Aerial Finesse masteries for the griffon, you will unlock the Griffon Expert and Griffon Master achievements, respectively. Doing so will also grant you access to the following adventures: