What is/are the Fractals of the Mists?

Fractals of the Mists, more commonly known as just Fractals, is technically a level 80 dungeon that is located in Lions Arch. In reality, it is a series of mini dungeons each with their own unique story that increase in difficulty scaling from level 1-100. This unique mechanic allows for newer players to jump in and learn the ropes while also offering more challenging content with higher rewards for veterans.

The dungeon can be accessed in two locations:

As mentioned before, Fractals of the Mists uses a difficulty scale which is unlike all other instanced content. The difficulty can be selected initially when entering into the Instance, and then changed in the hub by interacting with the Scale Setting Sequencer, which can be found by heading left immediately after entering. 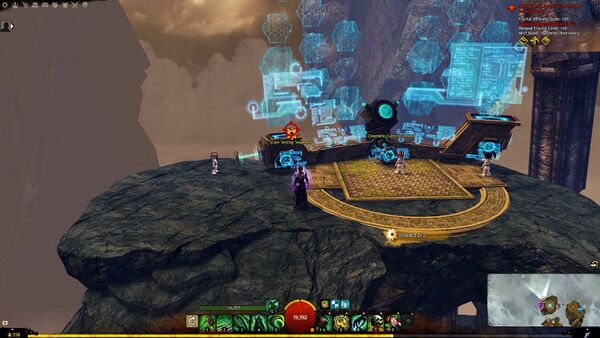 There are 100 different fractal levels that can be selected that are divided into 4 separate tiers. While eventually their seem to be plans to have 25 unique fractals so that no level repeats in a tier, there are currently only 20. This means that a few levels will occasionally repeat while in a fractal tier. Here are the differences in each tier as they progress:

Levels 1-25 These are the introductory levels that are used to teach players the basic layout and mechanics of each fractal level.

Levels 26-50 This tier introduces Mistlock Instabilities, which act as modifiers and add a new effect to the fractal level.

Levels 51-75 In this tier, players will have to deal with 2 stacking Mistlock instabilities.

Levels 76-100 The final and highest tier of fractals. These fractals all have 3 mistlock instabilities along with Fractal Avengers.

Each player also has an account wide "Personal Fractal Level". This serves two purposes when entering the dungeon.

Agony is an effect that begins at fractal level 20 and persists on all subsequent fractal levels. Agony takes the form of a condition of sorts, however it cannot be cleansed. With each tick of the Agony effect, players will have reduced healing and take a large amount of damage based on a percentage of their max HP. The amount of damage applied increased per fractal level, starting at 10% and ending at 180%. At later levels, agony resistance is required.

Agony damage can be reduced by applying Agony Resistance infusions to ascended equipment, eventually taking the damage down to as little as 1%. These infusions can only be placed in ascended armor and trinkets, with the only exception being an amulet. 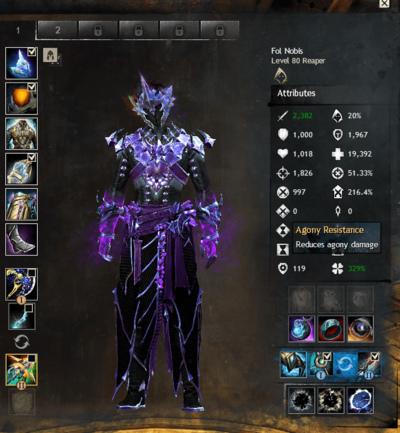 Mistlock instabilities are added effects to fractal levels starting at level 26. These instabilities then stack with each subsequent tier, ending with 3 fractal instabilities in tier 4. The instabilities can be seen at the top right and while selecting a fractal and inside the level. They shuffle randomly everyday, so it is unlikely to have the same combination on any given fractal. Here is a full list of instabilities that can be encountered.

Certain instabilities are fairly easy to deal with, however here are a few notes on some that are particularly frustrating:

Fractals of the Mists has its own section of masteries that can be earned like any other mastery with the mastery track. They are located in the Central Tyria mastery tab under Fractal Attunement. It is heavily recommended that all four of the masteries be trained as to utilize Mistlock Singularities which are located within each fractal level.

There are four types of fractal potions that can be earned or purchased inside the Mistlock Observatory that can be stacked up to 5 times. While not essential, they are a very nice boost to have when going into high level fractals. They are as follows: 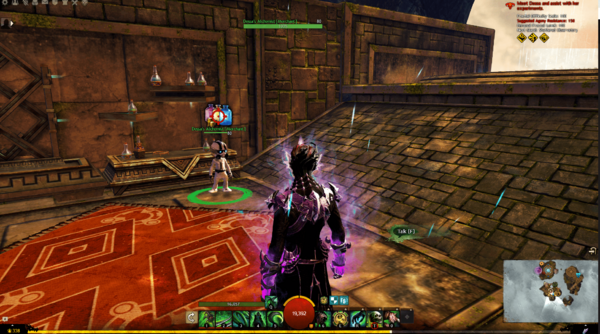 High level fractals are a very good source of income and equipment as they often drop ascended gear and other valuable materials.

Loot and Rewards from Fractals

After completing any given fractal, players will be rewarded with the following:

Every day after server reset, a new set of 3 daily fractals and 3 recommended fractals will become available. Oftentimes these fractals will be run and groups can be found on the LFG. At tier 4, it is common place to find a group running through all 3 Daily fractals and then completing the recommended levels. This is primarily where the big loot comes from as completing a daily or recommended fractal will reward the player with a chest that matches the tier they completed as well as all tiers under. At most, completing one daily fractal can reward 4 chests if done on tier 4. These chests often contain ascended loot as well as other valuable materials.

While the instabilities in fractals will always be random, both the daily and recommended fractals are on a 15 day rotation, with certain sets being available on those given days. Those rotations are as follows:

These fractals will always give enhanced rewards, and players should strive to complete them. Players often make a significant amount of gold by opening the Fractal Encryption that are rewarded by completing the daily and recommended fractals. Keys can be earned through chests or by purchasing them in the Mistlock Observatory.

While fractals are not as complicated as Raids can be, a team composition is still often required for higher tier fractals, and especially for level 99 and 100 CM. As fractals are limited to parties of 5 as opposed to squads of 10, there is less wiggle room as to what rolls need to be filled. However, most teams can get away with one source of healing, a source of

Alacrity, a source of

An example team comp, and one that is often expected is as follows:

This is by far not the only composition that will work for fractals, so feel free to experiment. For a selection of builds that are useful for fractals, please see our [builds]

This guide was written for introductory purposes. For more detailed guides on specific fractal levels, 99 & 100 Challenge Modes, and how to obtain Ad Infinitum please see our other guides!