How to Get the Skyscale Mount

Players must own all episodes of Living World season four, and have at least one character that has completed the third part of A Star to Guide Us: Legacy and the final part of War Eternal: Descent. You will also need 250 of each of the map materials. A total of 22 are needed for crafting, but you can also buy the crafted items directly off the trading post instead.

Some of the events required for these collections are group events. Don’t be afraid to ask for help in map chat (and tag up if you can), as there will usually be willing players around.

After completing the final part of War Eternal, players will receive a mail from Gorrik. Visiting him in the Skyscale Eyrie will start the collections that eventually unlock the skyscale.

Talking to Gorrik will unlock two collections: Skyscale Scales and Skyscale Medicine. Throughout Newborn Skyscales you will need to travel around the map three times, gathering items. Unfortunately, you cannot do these collections simultaneously, but several item locations are repeated so it may be useful to remember where you’ve been.

This stage simple requires you to buy five items from the merchants around the Pact Command:

The other three items are purchased from the quartermasters near each lane’s entrance. These merchants are only unlocked once you have completed the following achievements: Putting Out Fires, Life in the Underworld, and Cutting Weeds for the Crystal Bloom, Olmakhan, and Mist Warden Quartermasters, respectively. These achievements involve doing 10 events for each of the lanes. Once complete, you can purchase:

You must collect 21 Skyscale scales from all around Dragonfall. The map and table below details the suggested route: 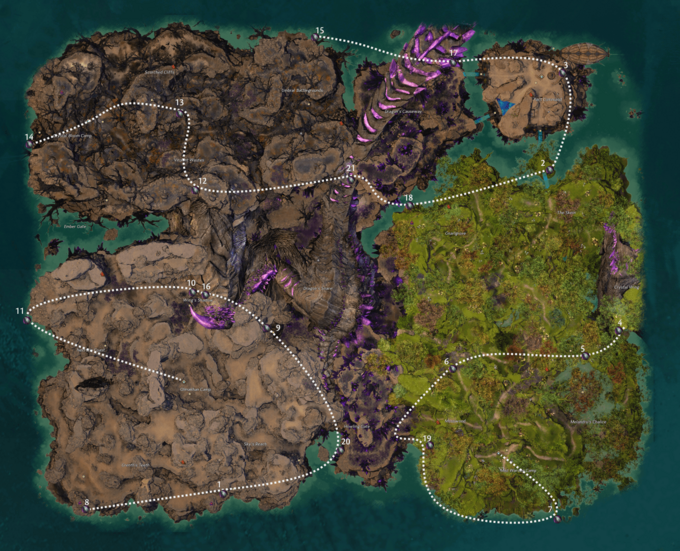 Throughout Dragonfall, you will find Skyscale Roosts that allow you to borrow a Skyscale. You can waypoint while mounted, so it will be extremely helpful to use them as much as possible while completing this collection.

Return to Gorrik after completing both the Medicine and Scales collections, and he will ask for your help administering the medicine - unlocking the Skyscale Fever collection.

You now need to bring the medicine to 14 Sick Skyscales that are also scattered around Dragonfall. This collection does not have hints like the previous one, only directing you to the approximate area the skyscale may be found. The map and table below details the suggested route:

Skyscales like to nest on the edge of cliffs, so try to maintain your height when traveling between them. And as before, make as much use of the temporary Skyscale Roosts as you can. 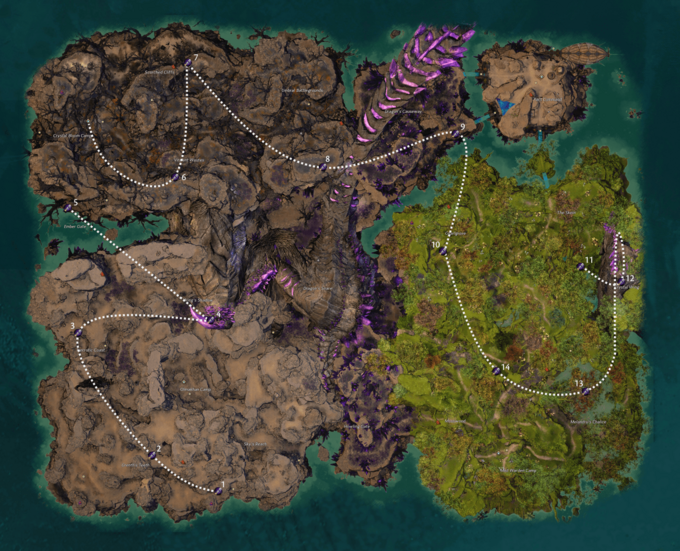 Return to Gorrik after completing Skyscale Fever, and he reveals that the previous step was basically pointless and you must now collect some eggs instead - unlocking the Skyscale Eggs collection!

Once more, you will need to traipse around Dragonfall to collect the 21 eggs. As with the previous collection, the hints only direct you to the approximate area, so see the map and suggested route below: 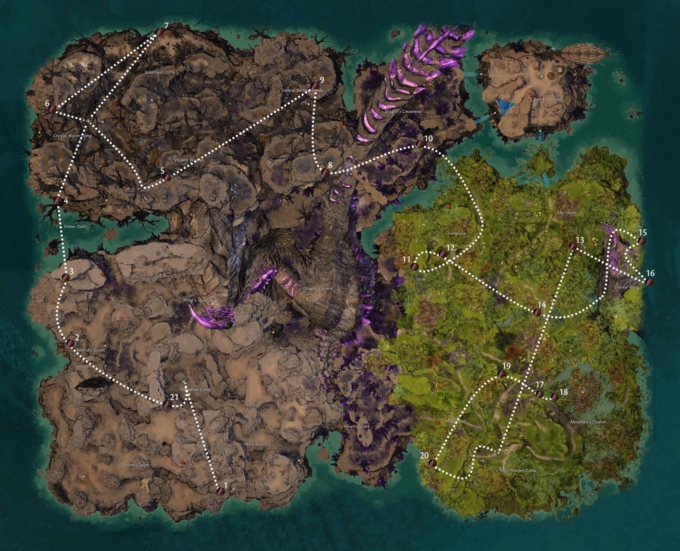 Returning to Gorrik will complete the Newborn Skyscales achievement. There is a cooldown period of two hours before you can progress to the next stage (indicated by the Waiting for Gorrik buff), whereupon you will receive a mail from Gorrik informing you that he has relocated to Sun’s Refuge. This cooldown will tick in real-time, so you do not have to be in-game for this period.

Upon finding Gorrik in Sun’s Refuge, you will be tasked with finding sources of magic to absorb into Skyscale eggs. This involves the completion of 12 small collections that unlock simultaneously. Some of the collection items are found within Derelict Delves, and therefore require finishing the Rune-Locked Doors achievement, or having another player port you to the locations.

To avoid having to revisit areas, you can complete the collection items in the following order:

The remaining items can be obtained in any order. The following is just a suggestion:

You will need to wait another two hours after completing Saving Skyscales before you can speak to Gorrik again.

Gorrik will send you another mail, calling you back to Sun’s Refuge.

One of the Skyscale eggs has hatched! You must now feed them up, as well as collecting a few toys. This starts three more collections, which may be completed in any order. Note that Skyscale Care has a minimum three-day timegate.

The first step of Skyscale care is to create a by combining the following in the Mystic Forge:

You will need a total of 12 of these items, and they may also be bought from the trading post (useful if you have trouble obtaining .

Approaching the hatchling will allow you to

Feed it a up to four times a day. If the hatchling won’t eat, you may need to

Play with it first.

In addition to the food from Skyscale Care, you will need to provide some additional treats to the hatchling by killing certain creatures from around Tyria for their meat. The drop-rate is rather high, so it shouldn’t require much time to obtain each one.

Except for the Karka, all the required creatures can be found near two locations: The Skimmer Ranch, and Fortune’s Vale.

To keep the hatchling entertained, you must purchase the following toys from around Tyria:

You will also need to craft a , or purchase one from the trading post.

Once you have the items, you can take bring them back to your hatchling to unlock the relevant collection items.

After the previous three collections have been completed, return to Gorrik to complete Raising Skyscales. Once again, you will need to wait two hours before you receive another mail from Gorrik, informing you that the Skyscale has escaped.

To track down the missing skyscale, you will need to follow it to 21 different locations. Upon reaching each of the locations, it will appear, and interacting with it causes it to run away again. You will also receive a . Using this within a relevant map will cause the skyscale to appear, completing the closest location automatically. It is highly recommended that you save the free treat for the Branded Ley-Line Anomaly, as other people are rarely around for this group event.

You will also be given the recipe to craft additional treats from the following ingredients:

Note: Crafting additional treats is completely optional, and allows you to skip one step per treat

The treats can be crafted by a level 300 chef, or purchased from the trading post. A total of 20 (in addition to the free one) will therefore enable you to skip the vast majority of this collection, though you will need to travel to each of the maps in question.

After completing Skyscale Lost, Gorrik suggests that you might prevent it from escaping again if you train it. This unlocks Skyscale Stealth and Skyscale Reflexes, which can be completed in either order.

For Skyscale Stealth, you need to play hide-and-seek with the Skyscale on each of three difficulties, by interacting with your Home Base. The skyscale will not hide too far from the Home Base (indicated by the orange circle on your compass), and there are several assistances to help you find them. First, the skyscale will make a sound when nearby. Second, it will ping the map if you take too long to find it. Finally, you can call target on the skyscale before beginning the game which can make it easier to spot. The skyscale will hide again after being found, and you must find it six times per difficulty. Finding the skyscale for the final time will complete this collection.

Interacting with the nearby ball will begin a game of fetch with the skyscale. After you throw the ball, the skyscale will catch it and throw it back to you. A small white area indicates where the ball will land, and you must stand in it to catch the ball and throw it back to the skyscale. This process repeats until you have caught the ball 12 times. It may be worth using movement skills to help. Finishing this process on all three difficulties will complete the collection.

After finishing Skyscale Stealth and Skyscale Reflexes, return to Gorrik once more to complete Troublesome Skyscales and start the final two-hour timer.

Gorrik will send a mail, asking you to visit him in Sun’s Refuge. He wishes to craft a saddle for the skyscale, which involves buying components from each of the Living World Season 4 maps. This step costs a total of 35 gold, 500 trade contracts, 1500 volatile magic, and 250 of each map material:

If you have not yet completed the Living World Return achievements for the maps in question, they are a very good way to earn the currency.

Head to Jahai Bluffs once the saddle is complete, and look for Gorrik on top of a bluff to the north-east of the Fortress of Jahai (you can use a Jackal Portal just north of Gorrik’s location to reach him): 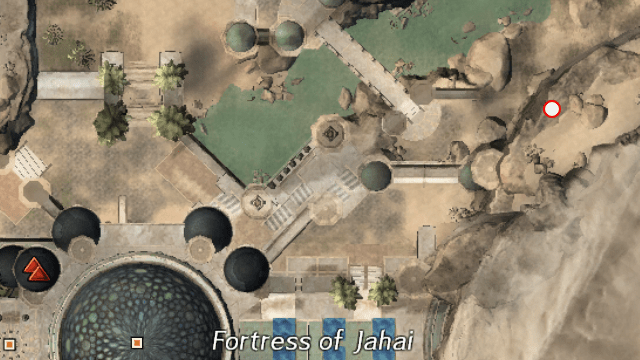 After providing the saddle, Gorrik suggests a test flight. Interact with the skyscale just south-west of Gorrik and fly to the reality tear above and north-north-west of your location. You will automatically interact with the tear by hovering close to it, completing A Lesson in Flying, and unlocking Skyscale Flight, the final collection required to unlock the skyscale.

Interacting with the reality tear in Jahai Bluffs unlocked the first part of the collection, and to complete it, you must interact with 27 tears across 27 Living World Season 4, Path of Fire, and Core Tyria maps. There are multiple tears on each map that will unlock the achievement, the following is just a recommendation. Near each tear is a “flying lesson” location that allows you to summon a skyscale, which will be necessary to reach most of them.

Note that while the collection items are somewhat grouped by region, the ordering of the Elonian maps, in particular, is strangely scattered.

Investigating the final reality tear will complete Skyscale Flight and unlock your very own skyscale mount!

Ruler of the Skies

Upon unlocking the second mastery in the Skyscale Mount line - Rift Repair - you will be able to return to these tears (and others) and close them. Interacting with these tears by hovering close by will spawn a trail of floating volatile magic. By following this trail and collecting all the magic, you will close the rift. Progress is indicated by the Rift Resonance buff, which indicates how many nodes are left in the trail.

There are explorer achievements for completing the reality tears in each of: Ascalon, Elona, Kryta, Living World Season 4, Maguuma Wastes, Ruins of Orr, Shiverpeak Mountains, and Tarnished Coast. Closing all 100 rifts will award the Ruler of the Skies achievement and title.